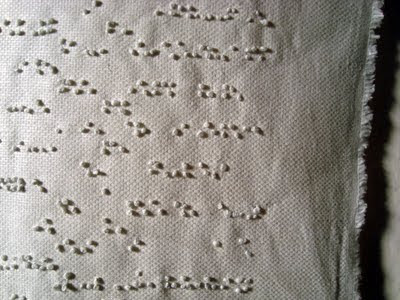 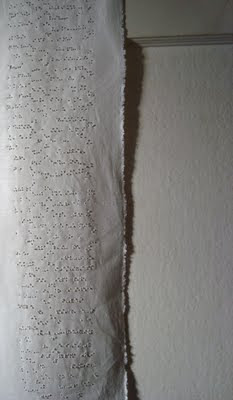 The piece above was made for a show at a Jewish museum in Philadelphia celebrating the wimpel, a ceremonial cloth used to swaddle a boy's legs during the bris ceremony (did I really just write that?). Unfortunately for me, after well over 70 hours worth of work, the poem embroidered onto the piece (in braille) was deemed too controversial to be reproduced for a show located in the sanctuary of a synagogue. I'll post a night shot if the sun ever comes out again.

Here's the artist statement I submitted:

As a gay male gentile (and an embroiderer at that!) it may seem a bit strange that I would be contributing to a show celebrating a ceremonial cloth made for Jewish children. Well, all I have to say is that it IS strange! However, this past year I have found myself completely surrounded by the newborn children of friends and relatives as well as a plethora of nascent births and misfires (and all the thrills and tears that accompany both) and this immersion has given rise to the stark realization that I will never procreate: that I will trod this world alone forever, no tiny carbon copies running through the house screaming their disdain for me, no clone on the phone searching for the best or cheapest elder care. The utter finality of it all has hit me hard but I’ve confronted it head-on as I am wont to do (Aries!) and have found solace in composing a poem exploring the situation using as inspiration a passage from Book 2 of Milton’s Paradise Lost:

Thus repulsed, our final hope Is flat despair: we must exasperate Th' Almighty Victor to spend all his rage; And that must end us; that must be our cure-- To be no more. Sad cure! for who would lose, Though full of pain, this intellectual being, Those thoughts that wander through eternity, To perish rather, swallowed up and lost In the wide womb of uncreated Night, Devoid of sense and motion?

Obviously I’ve altered my interpretation slightly to be relevant to the case at hand. In the poem, I wanted to capture the sense of architectural space and movement evident in Milton and on the canvas I’ve tried to approximate the celestial canopy, hence, the poem is embroidered in braille.

The Great White Milky Way
Oh, oh how i have sinned...spilled liquids similar yet of a far greater multitude than those of Onan, one of only two, struck down by his displeased creator!
Oh, my unborn children - you legions of tiny golems, each an infinite possibillity become impossible by my desire, I am compelled to address you!
I have carried you with me always - a searing potential roiling within - but ever so often, at the very least daily and sometimes more, in fact, the burden proves too heavy and gurgles up to explode from me in a white-hot and opalescent fuisillade, a genocide in a teaspoon.
So many, many expiring stains of silenced cries!
Oh, how the paths i have travelled i have soiled with seed, probably enough to populate an island nation, and a rather large one, at that.
Yet, in my defense, how many more monsters has the world been spared? How many saviors, masters or slaves?
A gift given too freely is so seldom appreciated, if i may paraphrase the bard.
So then, unblemished in your potential, you in your infinite stasis are the great cosmic chorus line. Your ranks ever-swelling -- thanks to me! -- you wander the stars for all of a boundless eternity free of care and worry, together forever in the ever-shifting ether, softly churning in a pastel nebulae of unbecoming while i forever retain the twinkle in my eye.
So yes, yes, I have sinned and in so doing you remain perfect and unsullied, my unborn children and i've given you the greatest gift of all - - that of absolute nothingness.
See you soon on the great, white milky way!
Posted by Richard Saja at 8:26 AM

Hi- I'm a fan. So, is your work no longer included in that show at Rodeph Shalom? And is this wimple really available for "cheap," as you say?

That's right, my wimpel has been ousted. I thought it ridiculous to show the piece w/out its translation from braille and a suitable compromise could not be reached. The whole experience has been a fairly terrible one for me, raising all sorts of issues. It's no longer available, though - I'm using it as a table runner.

Wow, so interesting. I know Matt S. and used to work with him, I know Maryanne a bit too. We talked about your work in my Modern Craft and Design class at Moore College this semester. Really love it! Thanks, and happy holidays!

you break my heart. again. the poem is lovely as is the piece. sisyphean urgency? can such an thing exist?

Your blog keeps getting better and better! Your older articles are not as good as newer ones you have a lot more creativity and originality now keep it up!

I wish you and I lived close to each other so that we could talk poetry and art. For now let just say without any risk of being Clement Greenberg: Nice work, Richard.

My golems solute your golems, and I love your wimple. xoxo H