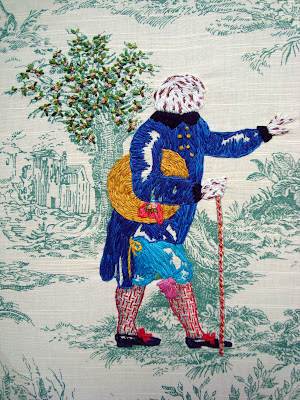 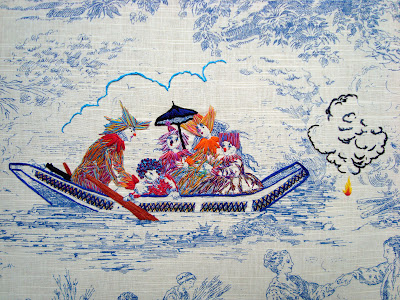 Contemporary artist Richard Saja views the circus as a controlled microcosm of all that is wild and uncivilized: “…the sanctioned gawking of placing those different than us in pens and cages to be ogled and derided, to be entertained by oafs and fools behaving in ways society doesn't permit.” In this diptych he combines these sentiments: in the panel at left, he presents a piebald, or spotted man, with hypertrichosis, a condition of excessive hair growth informally called “werewolf syndrome.” Many individuals with these medical conditions often joined the circus as part of the sideshow attractions as they were otherwise ostracized by society. Saja combines this figure with a group of clowns at sea, one of whom has tossed a fellow clown’s lighter overboard.

Saja embroiders his motley crew of circus figures on toile, a linen fabric that bears a repeated pattern of bucolic scenes of country life, which was primarily used in decorating designs for bourgeois society in the 18th century. This merging of high and low society heightens the disjuncture between the two worlds.

Courtesy of the artist
Posted by Richard Saja at 10:10 AM

I am obsessed with your embroideries on toile! Love love love!!

very nice work-I was surprised to see you have work up in my town right now- Burlington. I'm going to plan to see it!